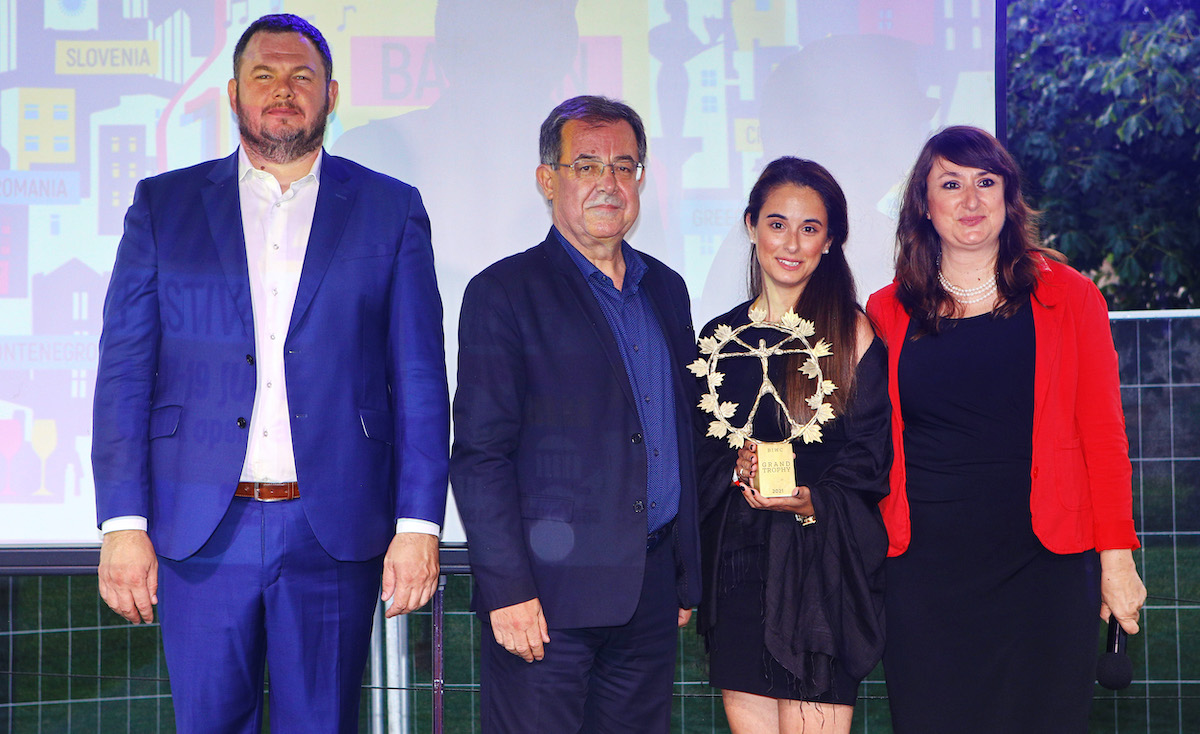 Vinsanto Late Release 2001 of the Greek winery Estate Argyros was named the best wine in the Balkans at the moment. The decision of the expert jury became clear during the traditional award ceremony, called „Balkan Wine Oscars“, at the tenth-anniversary edition of The Balkans International Wine Competition and Festival (BIWCF).

The most prestigious award in the Competition was presented by one of the special guests of the Festival – the Minister of Agriculture, Food and Forestry Prof. Dr. Hristo Bozukov. Along with him on the open stage in the festival Wine Town in front of the National Palace of Culture was the new chairman of the BIWCF jury – the Serbian judge and wine expert Igor Lukovic.

“It’s always a huge pleasure to come to Sofia, but this time it’s also a huge honour. 10 years are behind us and I’m sure that the next 10 will be even better. The Balkans International Wine Competition, thanks to Galina Niforou, shows us what we can do when we are together. And it’s not only a story about the quality of the wines, of the terroirs, about diversity, quantity of the bottle, etc. It’s a story about friendship and working together”, said Lukovic and ended his short speech with a humorous remark about the rainy weather in Sofia: “Let’s show today that we appreciate wine more than water!”.

The Serbian Ambassador in Bulgaria Zeljko Jovic came on the stage to take the trophy for the best orange wine (Vinarium Pinoranz 2019, Vinarium Winery, Serbia) on behalf of his compatriots who couldn’t travel to Sofia.

„I think that events like The Balkans International Wine Competition and Festival are the best places to strengthen the ties between people, to drink the best wine, to have sweet conversations with nice people. I wish you health and success and as a Serbian ambassador in Bulgaria, I hope all the awarded wines will be Serbian and Bulgarian“, said with a smile Jovic.

The trophy for „Best Winery in the Balkans“ was awarded for the second year in a row to Suvla Winery from Turkey. The award is given to the winery that has won the most medals in the competition.

At the end of the ceremony, BIWCF Director Galina Niforou announced the next host country for the competition. In 2022, the jury of the wine forum will evaluate Balkan wines in Greece.

„I’m sure that the Greek wineries and authorities will make this event amazing next year. It is really beautiful to travel around all Balkan countries and have this event. It gives us the opportunity to get to know each other, make friendships and to promote the Balkan wines”, said Galina Niforou.

Here is the complete list of trophy holders in the different categories:

The other participants in the contest with a record number of samples won double gold, gold, silver and bronze medals. The awards for best wine by country – Best of Show – were announced after the end of the competition in Skopje. During the official „Balkan Wine Oscars“ representatives of the Bulgarian winner – Roxs Winery, and the Turkish – Chamlija Winery – took personally their awards.

Here are the awarded Best of Show wines by countries:

The Balkans International Wine Festival is open until June 19, and welcomes the residents and guests of Sofia in the specially built Wine Town in the park in front of the National Palace of Culture. In addition to getting acquainted with some of the most interesting wineries in Bulgaria and the Balkans, wine lovers will have the opportunity to taste the award-winning wines in a special Golden Tent.